This page gives an introduction to the Bernoulli numbers and polynomials, as well as to the Euler numbers. Besides some basic results, one also finds some special and advanced properties.

For the computation of the Bernoulli numbers up to the huge index 107 see the program CalcBn V3.0 below. For further reading see the list of books at the end. See here for News & History.

The Bernoulli numbers Bn play an important role in several topics of mathematics. These numbers can be defined by the power series

where all numbers Bn are zero with odd index n > 1. The even-indexed rational numbers Bn alternate in sign. First values are

The values can be computed iteratively by the recurrence formula

The sequences of the numerators and denominators of Bn are A027641 and A027642, respectively.

Jacob Bernoulli Bernoulli1713 (1655-1705) introduced a sequence of rational numbers in his Ars Conjectandi, which was published posthumously in 1713. He used these numbers, later called Bernoulli numbers, to compute the sum of consecutive integer powers.

This formula is given by

An explicit formula for Bn was derived by Worpitzky Worpitzky1883 in 1883:

with S2(n, k) being the Stirling numbers of the second kind.

He also gave another formula for Sn(x):

Furthermore, one has by means of iterated forward differences the relation

The Bernoulli numbers are connected with the Riemann zeta function

on the positive real axis by Euler's celebrated formula for positive even n, also valid for n = 0:

The functional equation of ζ(s) leads to the following formula for negative integer arguments:

is the set of p-th roots of unity; otherwise irregular. Kummer then proved that Fermat's Last Theorem is true, that is

has no solution in positive integers x, y, and z, for the case when the exponent n is a regular prime.

If p does not divide any of the numerators of the Bernoulli numbers B2, B4, …, Bp−3, then p is regular.

In 1915 Jensen Jensen1915 proved that infinitely many irregular primes p exist with the restriction p ≡ 3 (mod 4). Carlitz Carlitz1954 later gave a short (and weaker) proof without any restriction on p.

Unfortunately, it is still an open question whether infinitely many regular primes exist. However, several computations (see, e.g., Hart, Harvey, and Ong HartHarveyOng2017) suggest that about 60% of all primes are regular, which agree with an expected distribution proposed by Siegel Siegel1964.

The index of irregularity i(p) is defined to be the number of such pairs belonging to p. If i(p) = 0, then p is regular, otherwise irregular.

Structure of the denominator

The denominator of Bn for positive even n is given by the famous von Staudt-Clausen theorem, independently found by von Staudt Staudt1840 and Clausen Clausen1840 in 1840:

As a consequence, the denominator is squarefree and divisible by 6.

Given a Bernoulli number Bn with n even, Rado Rado1934 showed that there exist infinitely many even m such that

implying that the numbers Bm have the same denominator as Bn.

Structure of the numerator

The unsigned numerator of the divided Bernoulli number Bn/n for positive even n equals 1 only for n = 2, 4, 6, 8, 10, 14; otherwise the numerator consists of a product of powers of irregular primes:

Since Bn/n is a p-integer for all primes p with p − 1 not dividing n, the structure of the numerator of Bn is given by

The additional left product is a trivial factor of Bn that divides n, see A300711.

The Kummer congruences describe the most important arithmetical properties of the Bernoulli numbers, which give a modular relation between these numbers.

Let φ denote Euler's totient function. Let n and m be positive even integers and p be a prime with p − 1 ∤ n.

The values ζ(1 − n) = −Bn/n and the Kummer congruences lead to the construction of p-adic zeta and L-functions, as introduced by Kubota and Leopoldt KubotaLeopoldt1964 in 1964. One kind of their constructions deals with p-adic zeta functions defined in certain residue classes; for a detailed theory see Koblitz Koblitz1996;Chap. II.

for p-adic integers s by taking any sequence (tν)ν ≥ 1 of nonnegative integers that p-adically converges to s. Indeed, this function is well-defined and has the following properties.

At nonnegative integer arguments the function ζ(p,ℓ)(s) interpolates values of the function ζp(1 − n). The Kummer congruences then state for r ≥ 1 that

Since ℤ is dense in ℤp, the function ζ(p,ℓ)(s), restricted on nonnegative integer arguments, uniquely extends, by means of the Kummer congruences and preserving the interpolation property, to a continuous function on ℤp.

The p-adic zeta function ζ(p,ℓ)(s) can be written as a special Mahler expansion (Kellner Kellner2007):

One has the relation

Condition for the existence of a unique simple zero (Kellner Kellner2007):

So far, no irregular pair (p, ℓ) has been found that the non congruence relation above holds as a congruence.

The irregular pairs of higher order describe the first appearance of higher powers of irregular prime factors of Bn/n.

For example, one obtains for the irregular pair (37, 32) that

Irregular pairs of higher order can be effectively and easily computed using Bernoulli numbers with small indices. By this means one can even predict the extremely huge index of the first occurrence of the power 3737 as listed above; see A251782.

Conjecture on the structure of the Bernoulli numbers

Under the assumption that every p-adic zeta function ζ(p,ℓ)(s) has a unique simple zero ξ(p,ℓ) in case (p, ℓ) is an irregular pair, one has for even n ≥ 2 (Kellner Kellner2007):

and |·|p is the ultrametric p-adic absolute value.

The denominator can be described by poles (always lying at ξ(p,0) = 0) and the numerator by zeros of p-adic zeta functions. Equivalently, the formula reads for the Bernoulli numbers:

The first product gives the trivial factor, the second product describes the product over irregular prime powers, and the third product yields the denominator of Bn.

Moreover, the formulas are valid for all irregular pairs (p, ℓ) with

This follows by computations of irregular pairs and cyclotomic invariants in that range by Hart, Harvey, and Ong HartHarveyOng2017. So far, no counterexample is known.

of discriminant d < −4. There is the following connection with the Bernoulli numbers due to Carlitz Carlitz1953.

where the sum runs over all even unimodular lattices Λ in dimension n and Aut(Λ) is the automorphism group of Λ. 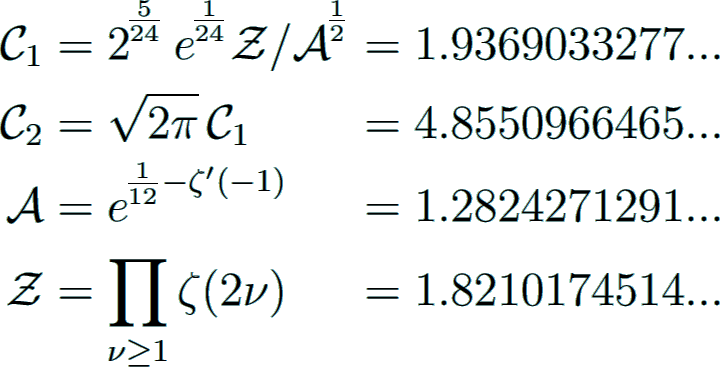 is the Glaisher-Kinkelin constant A074962 and

is the product over all Riemann zeta values at even positive integer arguments A080729.

and are given by the formula

The constant term of these polynomials is the Bernoulli number

The polynomial Sn(x) of degree n + 1, giving the sum of the nth powers of consecutive integers from 1 up to x − 1 in case x is a positive integer, satisfies the relation

Denominators of the Bernoulli polynomials

The denominator of Bn(x) − Bn, the nth Bernoulli polynomial without constant term, is given by the remarkable formula (Kellner and Sondow KellnerSondow2017, Kellner Kellner2017, and A195441)

where sp(n) denotes the sum of the base-p digits of n. The finite product can be written with explicit sharp bounds as

If {·} denotes the fractional part and n ≥ 1 is a fixed integer, then there is the surprising relation (Kellner Kellner2017b):

The denominator of the nth Bernoulli polynomial Bn(x) can be described by a similar formula (Kellner and Sondow KellnerSondow2018, A144845):

Quotients of the denominators

Further properties are given by Kellner and Sondow KellnerSondow2018. Using the notation

we have the relations

This implies a sequence of divisibilities

Furthermore, the denominators obey the rules

As a consequence, the quotients

which is an even function implying that all En = 0 with odd index n. The even-indexed numbers En are integers and alternate in sign. The first values (A028296) are

The pair (p, ℓ) is called an E-irregular pair, if p divides Eℓ where ℓ is even and 2 ≤ ℓ ≤ p − 3. The index of E-irregularity iE(p) is defined to be the number of such pairs belonging to p.

As in the case of the Bernoulli numbers, it is still an open question whether infinitely many E-regular primes exist.

Conjecture on the structure of the Euler numbers

For the Euler numbers one can state a similar conjectural formula as in the case of the Bernoulli numbers, though it is a bit more complicated.

One may conjecturally state for even n ≥ 2 that

where ξ(p,ℓ) is the unique simple zero of a certain p-adic L-function associated with an E-irregular pair (p, ℓ) ∈

of discriminant d < −4. Due to Carlitz Carlitz1953 one has the following connection with the Euler numbers.

CalcBn V3.0 is a multi-threaded program for computing the Bernoulli numbers via the Riemann zeta function. It uses special optimizations such that the main part of calculation can be performed by integer arithmetic. CalcBn depends on the GMP library, so it is recommended to use the latest version of GMP with possible optimizations for the current hardware. The source code of CalcBn for 32/64-bit Linux and Windows complies with C++11. It is released under the terms of the GNU Public License.

Factorizations of the numerators of the Bernoulli numbers, respectively, the Euler numbers with even index 2 to 10 000. Computed prime factors are less than one million, except for known greater prime factors.

The one millionth Bernoulli number